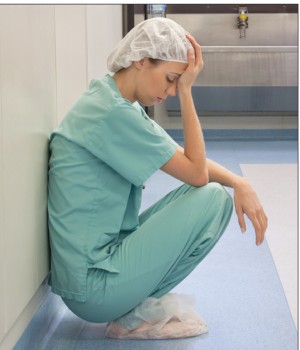 YOUNG PATHOLOGISTS and anesthesiologists were the most likely to say they regret their choice of specialty. According to a survey of more than 3,500 residents, 14.1% of young physicians regretted their career choice, and 7% said they would “definitely” or “probably” not choose the same specialty again.

JAMA published the survey results in September. Nearly one-third of pathologists (32.7%) and one-fifth of anesthesiologists (20.6%) said they regretted their choice.

How to deal with racist, sexist comments from patients

HOW SHOULD YOU HANDLE patients who refuse to be treated by doctors of a particular religion or race? What about those who are rude because they don’t respect physicians who are female?

After years of what she calls “paralysis” in the face of appalling comments, the author of a recent perspective piece in JAMA Internal Medicine has learned to set—and teach—boundaries. When patients voice bigoted or sexist comments, she immediately calls those out with a statement like, “We don’t tolerate that kind of speech” or “Let’s keep this professional,” without apologizing or negotiating. She also circles back later to ask patients why they made their comments.

The author, who’s with the University of Utah, also pulls trainees and medical students into role-playing exercises in which she models inappropriate behavior. “I ask the trainees, both men and women,” she writes, “to pick a phrase and practice.”