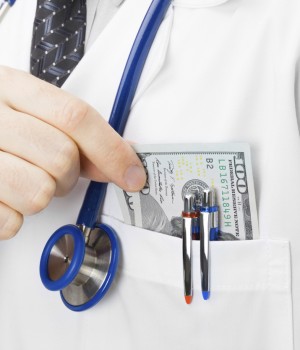 HOW BIG OF A ROLE does geography play in physician compensation? According to data from two 2017 surveys, location continues to be a major influence on physician pay.

One of those surveys, from Medscape, found that physicians in the highest-paying region make an average of more than $300,000. Physician pay in the lowest-paying region, by contrast, was $282,000.

It’s important to note that these numbers represent average compensation levels for all physicians, so they will be low for some subspecialties like cardiology and high for primary care specialties like internal medicine. The numbers, however, provide a useful window into how physician pay varies by region.

In the North Central Region, for example, which covers the Dakotas, Nebraska, Kansas, Missouri and Iowa, physician pay averages $317,000. North Dakota tops the list with an average pay of $361,000. Alaska is a close second, at $359,000. Both states are home to rural areas that need higher compensation to attract physicians.

In the West, which covers all of California, Hawaii and Alaska, physician pay averages $290,000. And in the Southwest, which includes Nevada, Arizona, Utah, Colorado and New Mexico, physician compensation comes in at $292,000.

One interesting trend: Physicians on both coasts are paid less than much of the rest of the country. Industry experts say that’s because these are the most desirable areas to live, so there’s more competition there for jobs.

Data by region and specialty
These data give a good overview of the country as a whole, but they fail to provide any detail on average pay for individual specialties. Another physician survey, conducted by the national physician staffing firm Merritt Hawkins, offers some insight into regional pay trends broken down for four specialties.

Like Medscape, Merritt Hawkins finds that physician pay tends to be lowest in the Northeast for three of the four specialties tracked.

For psychiatrists, the highest-paying region was the Southeast, with an average of $273,000.

For ob/gyns, the worst-paying region was the West, where they receive an average of $300,000.

It’s really interesting that physician pay in Alaska is the second highest in the nation. In my mind, that means that primary care in Alaska is top-quality. I wonder if that would help my cousin consider moving to Alaska since her daughter has been having a lot of health problems.

I don’t think that means that primary care is top-notch. It means that they need to have a high salary to attract prospective doctors becuase a lot of people don’t want to move there. The assumption you’re making is that this means better doctors, but I’m not so sure about that at all.

Is your hospital ready for “pronoun pins?”