CONSIDER THE JOB CANDIDATE who showed up in a rural community in a suit and tie even though he was told dress would be casual. Before a word was spoken, there was already a red flag.

“The employer worried that this candidate would never fit in because there’s no Nordstrom nearby,” says Regina Levison, vice president of client development for Jordan Search Consultants in St. Louis.

Dress misses are not just about a glaring Hawaiian shirt and flip flops—although Ms. Levison recalls one candidate who showed up in a sweat suit. “That showed lack of judgment,” she says.

How you dress matters because physicians are a key part of a practice’s marketing efforts.

Instead, it’s more common that what you’re wearing shows you don’t understand the environment in which you’ll be working or how the practice wants to represent itself.

Tommy Bohannon, vice president of national physician staffing firm Merritt Hawkins, talks about the candidate who showed up in a wrinkled, untucked shirt and scuffed shoes. The employer noticed. He also knew that the candidate had plenty of time to straighten up. “That candidate had gotten in early the previous day and had had plenty of time to plug in an iron at the hotel,” Mr. Bohannon says. How he presented himself became an integral part of how he was evaluated.

How you dress matters because physicians are an increasingly key part of hospitals’ and clinics’ customer service and marketing efforts. “It takes a significant investment in time and capital to get someone who’ll be a good representative of your organization,” Mr. Bohannon explains.

Appropriate attire for men is most often slacks, a long-sleeved shirt (no tie) and a sport coat, with perhaps a suit for an academic setting. Women should wear a pantsuit or skirt suit or a nice skirt and top—no denim or halter tops. Also avoid loud prints and stilettos, Ms. Levison says.

To get it right, remember to dress appropriately for the job’s culture, asking ahead of time if you’re unsure. “You want to be in tune,” says Steve Look, executive vice president of recruiting for The Medicus Firm in Dallas. “Some places are very remote and tell us not to come out in a full suit, that you’ll look ridiculous. Elsewhere you might be underdressed and not make a good impression. So don’t guess. Know beforehand.”

For example, if you’re going to Colorado, that means you’ll likely be expected to dress more casually, Mr. Bohannon says. That can translate into a sporty Northface jacket, hiking boots, and khakis.

Grooming appropriately is also important, says Ms. Levison. She tells women to use “daytime makeup.” She’s also asked some women with full curly hair to pull it back for the interview.

“What you want is for the employer to see your eyes, face and reactions,” she explains. “The goal is to look professional.”

And if you have a tattoo? If it can’t be covered up, let it go. Otherwise, wear a long sleeve shirt, she says.

Paula S. Katz is a freelance health care writer based in Vernon Hills, Ill. This article originally appeared on MedCareerGuide.com.

It is known that “the first impression is the last impression.” Your interview outfit plays a big part in creating an impression as a potential employer. So it’s important that candidates are well prepared for their interview. I am sure this article will help candidates choose the winning outfit for the job for which they are applying. 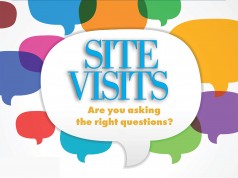 Site visits: Are you asking the right questions?